Also known as “why I had to, unfortunately, send mine back.”

Like many tech types I’m always on the lookout for a better way to deal with stuff. Most recently I’ve been on a wallet hunt.

My last wallet hunt lead to a Dopp Regatta 88. It kept just the stuff I needed, forced me to keep what I needed to a minimum, looked good, and wasn’t too expensive. I’ve gone through two of them now. Eventually credit cards blow out the sidewall of the thiner cloth interiors. They’re still a great option, but it was time to try something else.

I’ve been intrigued by the HuMn designs ever since I first saw them in one of the thousand other wallet posts online. The aluminum plates make the mechanical engineering part of my brain happy and the idea is just so damn elegant. After a couple Regatta’s at $25 a piece the HuMn prices, that put me off a couple years ago, didn’t seem bad anymore. It’ll last forever. And good design is worth it, dammit.

So I ordered a gray/black, two plate, HW2 just after Christmas. 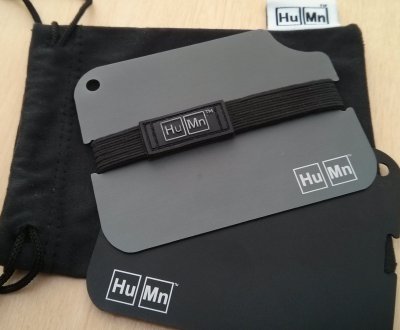 The order process was easy and it arrived faster than I was hoping. It came packed in a small microfiber bag and the plates were perfectly cut and finished with clean, but not sharp, edges. Very nice machine work. It also included their Shock Strap 2, using a rubber banding on the strap instead of the original metal. So my one concern about scratching whatever else is next to the wallet in my pocket wasn’t an issue. Perfect.

Putting my stuff in the HW2 gave me a bundle about as wide and thick as my Nexus 4 phone, and about 1/3 shorter. The phone and wallet fit together in the front left pocket of my Levi’s comfortably. So far so good.

Unfortunately, two issues killed the HW2 for me:

So I regrettably filled in a return form on HuMn’s website outlining these issues. Ken replied almost instantly and thanked me for the feedback. Great customer service!

Both of my issues are personal use things. If you don’t swipe cards daily, or the readers you use are more powerful, or you don’t carry/use cash often, or your fingers are smaller, or RFID skimming protection is more important to you, or, or, or, the HuMn is very much worth a try and the price. It’s an elegant design that will last forever, looks great, and can be customized via material and color selections to make yours unique.

Ken at HuMn did mention a new polycarbonate option they’re working on so I’ll keep stopping back.